Detail of dancers with solar-powered and electroacoustic tutu.

The AUDIO BALLERINAS are a group of dancers that use light sensors that enable them to produce sounds through the interaction of their movements and the surrounding light. A variety of other electronic instruments (digital samplers, contact microphones, light-to-frequency controllers, movement sensors, MP3 players, and radio receivers) allow them to work with the sounds, surfaces, and topographies of the space around them in a variety of solo or group choreographies.

Originally created in 1989 as solar-powered tutu for the Festivals Les Arts au Soleil (Lille/ Aeronef) the Ballerinas are until today a major project of Benoit Maubrey’s group. The Audio Ballerinas have been presented in numerous international festivals throughout the world. 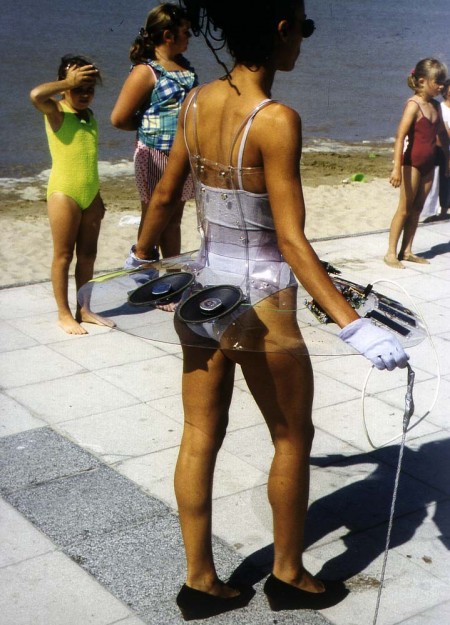 In 1989 I had been experimenting with solar cells as a power source for the Uniforms and realized that they needed to be mounted on a horizontal surface in order to catch as much of the sun as possible. This is the reason why (with the help of the artist Susken Rosenthal) (no link) I used a transparent disc-like skirt out of polycarbonate (plexiglass) that could hang from the waist. On this surface we placed the solar cells and electronics. A visiting dancer friend who saw the prototype explained that we had created a “tutu“ – the skirt-like piece of clothing that dancers usually wear in such classical ballet pieces as Swan Lake. We also discovered that the hard but flexible polycarbonate tutus were ideal for mounting speakers, circuitboards, microphone jacks and amplifiers, not unsimilar to a DJ‘s mixing table. We started trying out new equipment– for example, a digital chip (256 K) for sampling sounds, an electronic metronome, a photovoltaic resistor (to be used as a light sensor) and even a miniature radio receiver. In the end, we had a wearable instrument that could spontaneously pick up sounds, record them digitally, play them back, amplify them, repeat them (via an electronic “looping” device), and alter them via a down- and up-pitch mechanism. For example, the tutus could record five seconds of the sound of a bell tower ringing nearby and instantaneously play back the sound. The additional electronic features allowed the wearers to change the speed of the loop or the tenor of the pitch (like a rudimentary sampler) to make the pitch change to the sound of that of a heavy brass gong or, in the other direction, to that of jingling bells. This piece, called Digital Memory, is at the core of an Audio Ballerina performance.

In each place where they perform the first task of the group is to find a particular local sound – indigenous to that site or country– that can be used for this piece. A few examples are Lenin‘s piano in the former Lenin Museum in St. Peterburg, or a well-known yodeler in Munich, an aboriginee native playing the didgereedo in Australia, a Japanese shamisen (a sort of high pitched banjo) in Tokyo, or a famous avantgarde Swedish saxophonist (Mats Gustafsson). A group of Ballerinas will record this sound, loop it and play it back individually (via the pitching mechanism) while spreading out over an extended area (of a room or garden or park), thus creating –from one original sound– a multiacoustic and mobile concert.

These new additions allowed us to do away with the “Walkman” players and pre-recorded cassettes we had been using previously. At the same time the Audio Ballerinas still had the option of using contact microphones and Piezos, similar to the Guitar Monkeys, but instead of attaching them to old guitars, they fastened them onto other “instruments“, such as umbrellas or a simple metal rods, which functioned like giant phonograph needles being dragged on the ground and amplified via the electronics and solar cells on their tutus. Hence the title of the piece, the LINE (the Earth as a Record Player). Acoustically speaking, the sound of this piece can be liked to a team of sanitation workers dragging empty garbage cans on the street.

With their photovoltaic sensors the Audio Ballerinas can react to light: not unlike a Geiger counter responding to radioactive substances. The pitch of the sound changes according to the intensity of the light. This occurs when either their own shadows or the shadows from their surroundings (tree, clouds) interfere with the direct light as they dance through the space: this piece now called the Peeper choreography and improved through a newer generation of Light-to-Frequency Controllers has developed today into a full-fledged choreography. In effect, they can thus translate their body and hand movements into sound.

With their radio receivers powered with via an individual solar cell (fixed to their head or arm), the Audio Ballerinas render radio waves audible by positioning their bodies in different angles to the sun, playing with “white noise“ and radio channels: their body movement changes the sound.

The solar-powered tutus were eventually replaced by rechargeable battery-powered tutus. Since 1989 newer generations of electroacoustic dresses equipped are taking advantage of an ever-increasing panoply of electronic circuits and gadgets on the market: in fact we are continually “up-grading” the tutus. The original tutus however are still used for SOLAR theme- festival and events.

A recent addition to the Ballerina instrumentarium is the so-called Yamaha performance where the circuitboard of a child’s electronic piano is equipped with tilt sensors so that the various sounds and tunes from the instrument are triggered by the dancers’ movements. 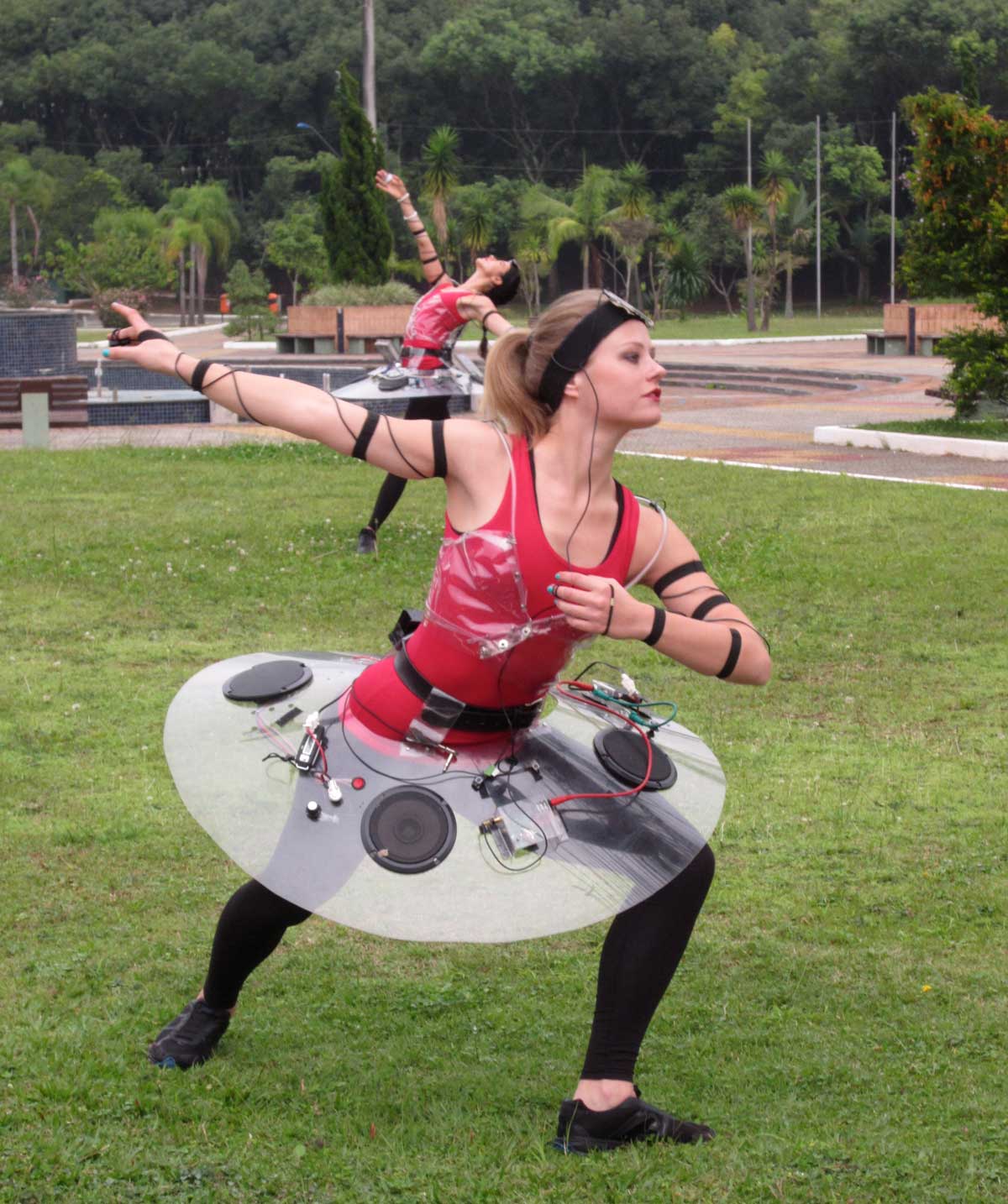 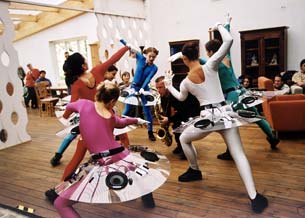